In partnership with Cycling UK and BCC, we donated 8 bikes to the Octavius Learning and Development Partnership (OLDP), a group providing support pathways for women to get into building construction.

OLDP also help to motivate women to keep active and get into cycling. OLDP Chair, Barbara, contacted us to see if we could help with getting them some bikes so they could set up their very own cycling club, Fit2Bike. Barbara said, she’s “done the bike leader training and that has given me confidence to take groups out.”

OLDP has a thriving hub at Quayside Tower on Broad Street, where we delivered the 8 bikes donated to us by our partner at Raleigh. We’ll also be offering the members of Fit2Bike club Cycle Fix it sessions so they can learn how to keep their bikes maintained and safe to use.

Cycling UK’s Development Officer (for Birmingham), Vanessa Morrison, has encouraged two Fit2Bike attendees onto Ride Leader Training, where they’ll be able to lead their own cycling sessions in the future. One of the bike recipients and Fit2Bike Cycle Club members Janet Gray, says that cycling has not only helped her keep physically active but is also something she enjoys doing in her spare time:

“Self-care for me is pretty non-existent and [I] tend not to be able to stick to an exercise plan because I get so busy. I used to cycle when I was at university and would cycle from Bristol to Bath often. I really enjoy it.”

Currently, across 12 of the UK’s biggest cities and urban areas, including the West Midlands, men are twice as likely to use a bicycle on a regular basis than women. Data will be collected and recorded by Fit2Bike to help demonstrate the positive impact that bikes can have to get more women cycling and reducing the disparities between men and women.

Across the city, other organisations are also showing how important and beneficial cycling can be.

Ann-Rebekah Judeh and Debbie Bourbage from Birmingham Talks & Tours are looking to set up some History Bike Rides around the city. Debbie said:

“I’m one of the founders of Birmingham Talks and Tours. As a historian, I enjoy anything to do with the past. I also love walks, helping others, days away and exercise, so this is great.”

“I’m 67 myself and still physically active. I do walks and runs for charity, and I do lots of volunteering and teaching for various organisations. I’m a historian and archaeologist and work as a touring guide.”

Ladywood Neighbourhood Network Scheme (NNS), who work to support the wellbeing of residents in the area, is also involved with the Fit2Bike club. Project Co-ordinator Carlene McKenzie, said:

“I have always been very conscious of my health and wellbeing and being part of Fit2Bike helps for my mind, body, soul and health regime. I also encourage others to join in as much as possible.” 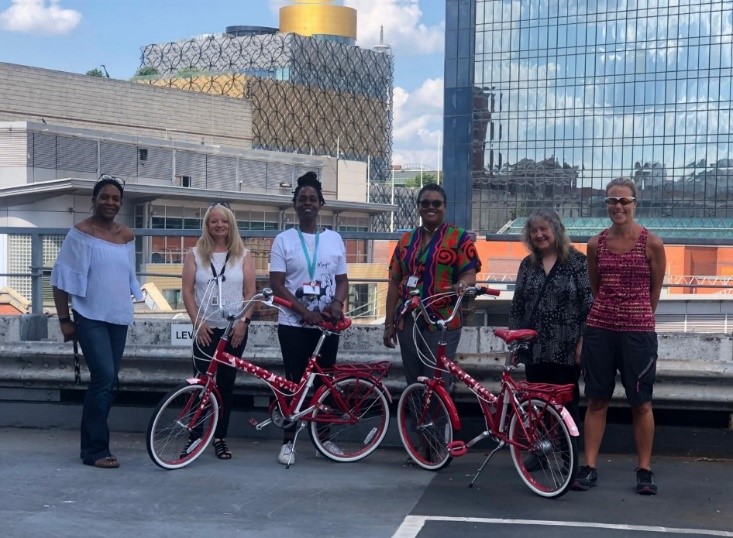