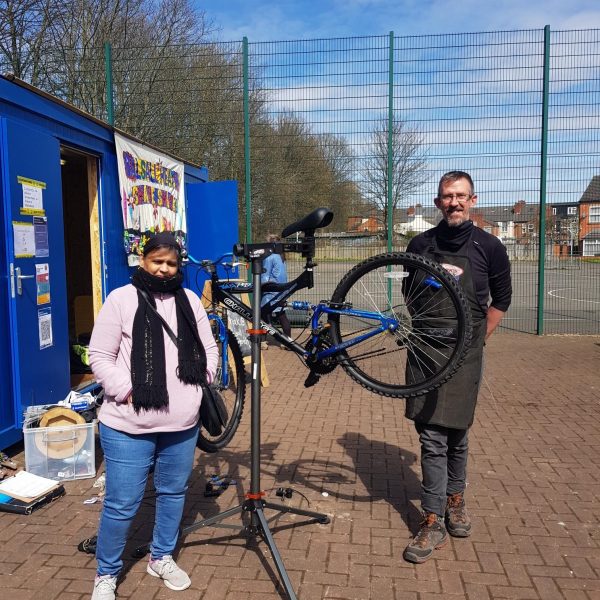 Husband and wife, Raza and Rashida, took Raza’s and their daughters’ bikes to the Cycle Fix-It Café to have them checked and repaired. The Cycle Fix-It Cafés are a free, pop-up, bike repair service where our bike mechanic can carry out a cycle ‘M’ check and any basic repairs. An ‘M’ check is a simple, 11-step method for checking a bike is safe and ready to ride.

Rashida used to cycle to school every day in India, but after her childhood, she hadn’t ridden a bike in 30 years. In 2019, she decided she wanted to get back into cycling and joined a Learn to Ride session at Saheli Hub to build up her confidence again. She quickly remembered how to do it and joined the Led Ride group in the park.

Rashida is now an avid cyclist. During lockdown, she stopped using her car and instead tries to walk or cycle everywhere. Cycling is now part of her daily routine. She has even started cycling to and from the Led Ride sessions. Rashida explained,

She loves taking part in the Led Ride sessions as she enjoys the company of being part of a group.

During the Easter school holidays, Raza and Rashida’s daughter took part in our Bikeability Level 1 training at Balsall Heath City Farm. During the course, she learnt how to ride, control the bike at different speeds, and developed her confidence.

Raza decided that he also wanted to get back into cycling after spending a lot of time inside over the last year. He explained that,

‘I found that after this all this time during covid, sitting at home, locking ourselves up, I found that I missed going out. And then I thought that this is the best way forward, rather than walking, that my bike would be my transport.’

Rashida had told him about the Cycle Fix-it Café at Balsall Heath City Farm. ‘So, I took out my bike from my shed, which was lying around for two years now, it hadn’t been used. It has a bit of attention that needed an expert hand. So, I came up here to get it fixed.’

At the Cycle Fix-it Café, while the bike mechanics check and repair the bikes, they explain what they’re doing, so that you can gain the skills to fix your own bike in the future. Rashida explained that their gear cables were replaced and ‘Raza was watching, and he has learned how to get the new tires because that bike needs new tires. He has learned how to get that sorted.’

Now that their bikes have been repaired, they are excited to be able to cycle as a family and enjoy exploring new places. They plan to build up to doing longer rides and spend the summer getting out on their bikes. Raza said ‘We’ve had enough of lockdown; we want to see some sunshine. You can’t see the best sunshine sitting in the car.’

Our Cycle Fix-it Cafes are open every week at our Share Shacks located at Balsall Heath City Farm, Malvern Street, Balsall Heath, B12 8NN on Tuesdays 10am-1pm, and at St Vincent Street West, B16 8RP on Wednesday 10am-1pm. The service is free, and you don’t need to book. All you need is a Wellbeing Card. To find out more visit: https://theaws.co.uk/cycle-fix-it-cafes/.